Arnold Weisgold received his dental degree from Temple University School of Dentistry in 1961. After graduation, he served as a Captain in the U.S. Army Dental Corps for two years.

In 1963, he matriculated at the University of Pennsylvania Graduate School of Medicine where he studied Periodontal Prosthesis, successfully receiving certificates in both Periodontics and Fixed Prosthodontics.

In 1965, he was named the first Coordinator of Occlusion at Temple University where he developed a four year program in this discipline. He returned to the University of Pennsylvania in 1967 where he established the Department of Form and Function of the Masticatory System, the first of its kind in the world. In 1973, he became the Director of Postdoctoral Periodontal Prosthesis and served in this capacity until 2006. From 1984 until 1987 he was the Associate Dean for Clinical Sciences and was the first Director of the Implant Research Center (1990-1996). He is presently Clinical Professor of Periodontics.

He has served on the Council on National Board Examinations and is a Consulting Editor for the Compendium of Continuing Education in Dentistry, the International Journal of Periodontics and Restorative Dentistry and the Journal of Esthetic and Restorative Dentistry. He was the President of the Associate Section of the American of Periodontology (1974-75) and the President of the Greater New York Academy of Prosthodontics (1989-1990). In 2006, he received the Saul Schluger Memorial Award for Clinical Excellence from the Seattle Study Club.

Dr. Weisgold has presented lectures throughout this country, Canada, Mexico, South America, Europe, South Africa, the Mideast and Far East and is the author of many papers and/or chapters in the areas of Periodontal Prosthesis, Restorative Dentistry, Esthetics, Implant Prosthodontics and Occlusion.

Contributions of this expert 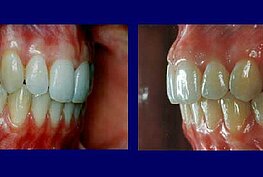 This scientific lecture from Dr. Weisgold explains in detail the histological details of the soft and hard tissue around implants and its impact on the single tooth implant.